Employers and business groups are trying to stop an Obama administration effort that calls for federal contractors to hire a minimum number of disabled workers and could penalize those who don’t by revoking their contracts.

The proposal could reshape hiring at roughly 200,000 companies that generate $700 billion a year in contracts with the federal government. They include defense contractor Lockheed Martin Corp., aircraft maker Boeing Co. and firms across the health-care, construction and information-technology industries.

Under the Labor Department plan, most firms that contract or subcontract with the federal government would be asked to have disabled people make up 7% of their work force. While the department says it wouldn’t be an explicit requirement, companies that don’t hit the target could have their contracts canceled or could be barred from winning future contracts until they show they are trying to meet the target. 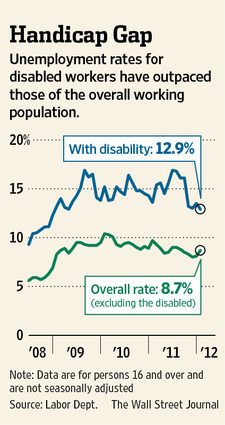 Companies have flooded the department with complaints that the rule amounts to a first-ever government quota for hiring disabled workers that would expose them to a thicket of legal pitfalls. Some employers say there might not be enough qualified disabled workers in their fields to meet that target and that they may have to fire nondisabled workers to achieve the ratio. Others say that existing federal law actually prohibits them from asking whether a job applicant is disabled, potentially forcing firms to violate one law in order to comply with another.

“We are very concerned that the department is moving forward with what is clearly a fundamental change in longstanding policies regarding affirmative action,” said Jeffrey McGuiness, president of the HR Policy Association, a trade group for human-resource executives at more than 300 of the largest private-sector U.S. companies.

The proposed changes were pushed in part by disability advocates, who say that decades-old laws intended to bring disabled people into the work force just aren’t working. Technology has made it far easier for victims of illness or accident to complete work tasks.

The proposed contracting requirements are part of a broader federal effort aimed at making it easier for disabled people to find work, including injured war veterans. On Tuesday, the Equal Employment Opportunity Commission released updated guidelines to ensure that veterans with wartime injuries such as post traumatic stress disorder and other ailments qualify for federal disability protections.

Current law encourages federal contractors to maintain a diverse work force but sets no parameters on how many jobs must go to disabled Americans.

“What gets measured gets done,” said Patricia Shiu, director of the Labor Department’s Office of Federal Contract Compliance Programs. “And we’re in the business of getting things done.” The agency is proposing the change as an update to the Rehabilitation Act of 1973.

The 7% target would apply to a contractor’s work force as well as subsets of workers based on factors such as their job description and wage rates. Disability advocates hope the subset requirement will ensure disabled workers aren’t unfairly steered toward lower-paying jobs. The department settled on a 7% target because it estimates that 5.7% of the civilian labor force—those working or looking for work—has a disability but another 1.7% of the civilian population is disabled and, by the Labor Department’s estimation, wants work but is discouraged from seeking it.

Regulators also are considering requiring that 2% of contractors’ work forces be comprised of severely disabled workers, such as those with total deafness, blindness, or missing extremities.

The scope of what would constitute a disability also isn’t clear since the Labor Department’s proposal doesn’t include a specific list. The Americans with Disabilities Act, updated in 2008, says that workers are disabled if they have a physical or mental impairment that substantially limits one or more of their major life activities. Lawyers who represent employers say that could include hundreds of possibilities from blindness to deafness to the less apparent such as asthma or mental illness.

Businesses with fewer than 50 employees and less than $50,000 in federal contracts would be exempt from the hiring changes.

Employers that don’t reach the targets would be given a chance to improve compliance and would only lose contracts in “the most egregious cases” of not following the rule, Ms. Shiu said.

Business officials say it isn’t that simple. “You’re looking to fill a position with the best possible hire and that doesn’t necessarily preclude or exclude somebody with a disability,” said Joe Trauger, a vice president for human-resources policy at the National Association of Manufacturers, a trade group representing 11,000 companies.

Sonalysts Inc., an employee-owned professional-services business of 400 workers that mostly serves the Defense Department, is asking the Labor Department to scrap the proposal. The Waterford, Conn., company estimates it would spend about $120,000 a year to hire the workers, process data tracking disabled employment and pay for legal challenges it expects would result from the rule.

A Boeing spokesman said the company is studying the proposal, and Lockheed Martin declined to comment on what it told the Labor Department in response to the proposal.

FirstBank Holding Co. of Lakewood, Co., says the rule would burden the company with paperwork and reporting requirements without actually increasing the number of disabled workers it employs. “Individuals with disabilities are not even applying for our open positions,” the company wrote to the Labor Department. FirstBank asked the department to scale back the proposal but favors its requirement that employers advertise job openings with specific organizations that target the disabled.

Kevan Johnson, an employment consultant with REACH of Dallas, a nonprofit that helps disabled people lead independent lives, said stronger regulations are needed because severely disabled workers are being overlooked by contractors “who think they can’t do the job.” Mr. Johnson said employers might not be aware of workplace accommodations they could make to enable a disabled person to do their job. “There’s an education process,” he said.

Some employers worry that, in seeking out disabled workers, they would end up violating the Americans with Disabilities Act of 1990, which they say prohibits employers from asking disability-related questions before hiring someone. There is also concern that such inquiries would make contractors vulnerable to lawsuits from people alleging their disclosures were actually used against them.

Labor’s Ms. Shiu said the requirement would be legal because contractors would be inviting people to “voluntarily self-identify” a disability to improve data collection. Companies would have to invite employees to do the same through an annual, anonymous survey.